I know, when I started this program I said I’d send out some new “desktop portals” every month.  I’m just a little slow on the uptake this month… but it is still June!

So I have two new images for your computer and mobile gizmo.

For your computer, I present the Beauly Priory, a small monastic ruin on a peninsula called “The Black Isle” near Inverness in the Scottish highlands.

If you are a fan, you might recognize the site, which I just learned has been used as a location for the “Outlander” TeeVee Series.  It has an even greater signifance for me, personally – because in a very real sense, this is where “Portals Of Stone” began.  I first visited the site when touring Scotland with my wife in the fall of 2012, but I didn’t have nearly as much time as I wanted to photograph the ruins.  I remember very clearly thinking to myself as we drove away, “I need to come back here…” – which I did about six months later.For your mobile device, here is one of the very first portals that appeared after that return trip to Scotland in the spring of 2013: 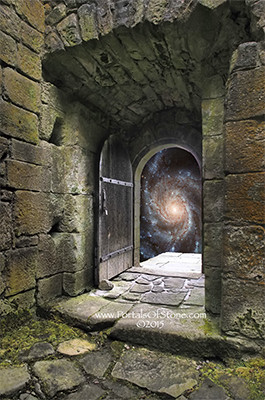 This is looking out the main entrance of a ruin called Hermitage Castle in The Borders region of Scotland.  The castle served as fortress for a variety of families and has a somewhat colorful if brutal history; the site also figures prominently in the story of Mary, Queen of Scots, for it was here that the conspiracies that led to her undoing were first hatched.

Click here to see more of Hermitage and the other Castles and Abbeys from my 2013 expedition.

I hope you enjoy these images and you will download them and use them on your gizmos.

Before I go, I have one other bit of news to share:

We probably met when you stopped by my installation at the “O” Gallery in the Arcade during one of the First Saturday Downtown Art Crawls over the past year or so.  So it is with some sad reluctance that I let you know that that installation will be coming down at the end of the month.  My last day there will be this coming Saturday, June 27.  I’ll be there from 1-4:00 PM, and after that I’ll be taking everything down.  If you’ve ever thought you might like to have one of these pieces to hang on your wall, come by Saturday and, well, you know… let’s make a deal…

I have no idea at the moment where I will display this work next, if anywhere, so if you’ve got any ideas or suggestions, by all means, pass them along.

I will try to get some more desktop files for you next month, but it’s already so late in June that I might just wait for August.  In the meantime…

Thanks, and see you “on the other side of the Portal…”